I’ll be honest, I’m slightly tempted to open this update with a recital of “My Way” – such is the fact that this may well be one of the final, full weekly updates I do!

Before we get to this week’s update however, here are the results of last week’s executive committee elections:

They’ll be taking over from us over term 3, but I think it’s fair to say that the Club is in very safe and capable hands for the next academic year.

But anyway, what do we have happening this week?

This week’s Lefty Latte meet-up will be a little bit different. We’ll be focusing on policy ideas so I suppose the question should be: ‘What do you think would be a good Labour policy idea?”

I’d be interested in finding out what YOU think should go into the 2015 Labour Party manifesto, and to prove that we at Warwick Labour really do listen, we will be visited by Charlotte Hale who is the West Midlands National Policy Forum (NPF) youth representative.

That means what you say can influence the party’s policy formation! I’d urge people to have a think about what Labour should be saying to voters come the next election and let Charlotte know. She’s coming to Warwick to get our perspective after all!

I hope to see as many people their as possible – as always it will be a relaxed event and I will try my best to make sure everybody is heard in equal measure.

This may very well be the final “official” Lefty Lattes of the year, so let’s make it a good one! Of course there will no doubt be informal Thursday meet-ups right the way through term 3.

We’re meeting at the slightly later time of 6pm this week, the exact location will be confirmed soon!

And now, a message from our esteemed Social Sec, Lucy White…

Hi everyone! Thought it would be nice to have an end of term meal, and nandos always seems to be a winner! if anyone has somewhere they think would be even more delicious then please don’t hesitate to say! this should be a nice chilled one to finish this term, it will be happening once we have finished lefty lattes with guest speaker Charlotte Hale so it will be nice and straight forward getting there! Let me know soonish if you want to come as I will defo have to book as there are usually rather a few of us! Lots of love to all xxxxxx

Keep an eye on the Facebook event for travel details etc, to be confirmed later in the week! 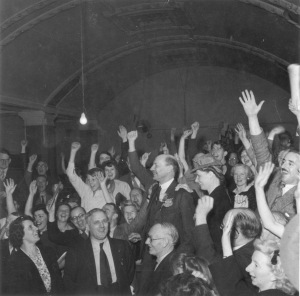 This Sunday, Warwick Arts Centre is screening the new Ken Loach documentary, “The Spirit of ’45”. The film focuses on 1945: a pivotal year in British history and one which saw the Labour Party returned to office with a landslide result.

Combining archive footage with contemporary interviews, Loach creates an absorbing political and social narrative about one of the most important periods in British history.

The screening on Sunday will be a live simulcast broadcast from London, along with an interactive Q&A session with Ken Loach himself.

This looks like a fantastic film and it would be great to get loads of Warwick Labour members to turn out! Plus, tickets are only £3.50 if you’re a Warwick student – can’t say fairer than that!

If you’re looking to come along, I’d recommend booking your ticket online ASAP – the chances are this will sell out. For ease of booking, let’s say Row F can be the Warwick Labour row, so try and get a seat there. When booked, post below in the comments where you’re sitting!

So this should be a fantastic week to round off Warwick Labour’s term! Hope to see you at something soon and let me thank every last one of you for turning up to our events and making this such a brilliant term – until the next one, see you soon!